Dome of the Rock 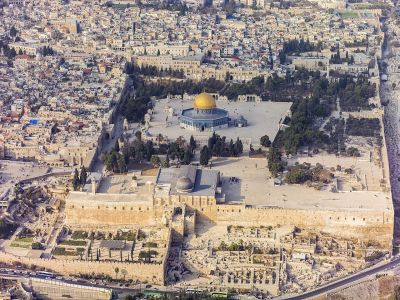 The Dome of the Rock[edit]

There is no doubt that the Dome of the Rock is one of the rarest works of the Islamic regions. The Dome of the Rock is one of the first known domed works of Islamic architecture. The Dome of the Rock is called with different names which are Qubbat al-Sakhrah in Arabic, and Templum Domini (Kapolony, 2010, p. 78) or Temple of the Lord during the Crusades. It is close to the centre of al-Aqsa Mosque enclave, and it has been built a few meters to the north-west of the centre of the al-Aqsa enclave (AL-RATROUT, 2004, p. 369). Also, the Dome of the Rock takes place the highest point on the centre of the al-Aqsa enclave. After the city came under Muslim rule by Umar ibn al-Khattab in 637CE had given sign the place would be given importance throughout Islamic history. The Dome of the Rock is the best sign of this in the early Islamic period. It is said that, the Dome of the Rock was built in place of the Umar mosque that had been built in the time of the Umar al Khattab after the conquest of the the Holy City. This is not accurate as the mihrab (the niche in the qibla wall of a mosque) still exists at its southern wall (Al-Hamad, 2007). The remarkable monument which was built by the Umayyad caliph Abd al-Malik was completed in 691 (Rabbat, 2014, p. 12). Also, the date of completion of it has been understood from an inscription in Kufi script (AL-RATROUT, 2004, p. 370) inside of the monument. Some claim that the Dome of the Rock had been planned as a shrine (a place of visit) rather than a Masjid (place of prayer). But in the early Islamic period, it was used as a place of prayer. Moreover, the structure has created a discussion that the purpose of the building and why it was needed. According to the Oleg Grabar who quotes from the other authors, they explain the purpose of the structure. They argue that Abd al-Malik considered Jerusalem Beytülmakdis as the religious centre of Islam and built the Dome of the Rock (Qubbat al-Sakhrah) as a centre for pilgrimage (Grabar, 1959, p. 35), basing these interpretation on a singular quotation from the Shi'i historian al-Ya’qubi. Whereas, according to al-Ratrout, the Dome of the Rock should be associated with Kaaba in terms of pilgrimage. Namely, The Dome of the Rock should have had a similar shape, like the Kabah. Besides, the Dome of the Rock does not have a large courtyard as Kaaba, which means it is very hard for all Muslims to tawaf at the same time (AL-RATROUT, 2004, p. 372). Rejecting this claim, he argues that it can be said that the reason for the building of the Dome of Rock was part of the overall rebuilding project of al-Aqsa Mosque. Also, this monument has changed the skyline of the city and provides a Muslim identity to the city(AL-RATROUT, 2004).

The Significant of Religion for The Dome of The Rock

According to Muslim belief, this Rock is significant as it is associated with Prophet Muhammad's Qiblah and Ascension. In the Qur'an, this relationship has been described with the Surah of Isra. Surah of Isra mentions about the destination of his Night Journey (AL-RATROUT, 2004, p. 373). It is said that The Prophet Muhammad had ascended from the rock where later the Dome of the Rock was built. In addition, the area of al-Aqsa Mosque, and in particular where the Dome of the Rock is located, has been accepted as the first Qiblah of Muslims (AL-RATROUT, 2004). Another important significance is that, the place of al-Aqsa Mosque is generally associated with the Day of Judgment(al-Awaisi, 2007, p. 32).Therefore, the Dome of Rock or Qubbat al-Sakhrah in the heart of al-Aqsa Mosque is a milestone in Muslim belief.

The History of the Dome of the Rock[edit]

It is known from history that the Dome of the Rock had been built in the period of Umayyad and before the dome was built over the Rock, its significance is recorded and some historical accounts associate it with certain periods. Late in the 6th BC period, Jerusalem has been occupied by Babylon but in this period, it cannot be mentioned existed neither monuments nor monuments places. Because all monuments completely were destroyed by them, however, they did not interest in reanimating all city structures, also included the enclave of Masjid al Aqsa(Shammalah, 2019, p. 47). After the Persians occupied the Jerusalem Beytulmakdis in 539 BC, it is claimed that the walls of the city which were built with "Solomon's Temple", were destroyed by the Babylonians(“Solomon temple,” 2020). Respectively, the period of sovereignty in Jerusalem Beytulmakdis had followed by the Greek period so, Greek-style was seen to affect monuments in Jerusalem. One of the most remarkable performances in the period of King Herod the Great in 40 BC. The boundaries of the area known today as “Al-Aqsa Mosque” were determined by the walls built during Herod's time(“time of Herod in Jerusalem,” 2020). The Roman period continued until 325AD(Shammalah, 2019, p. 48). Roman commander Titus destroyed many buildings in Jerusalem Beytulmakdis, like the Persians in that period. Jerusalem Beytulmakdis had different environments than before in the time of the Byzantine in 313-640AD(Magnis, 2012, p. 333). The Christianising culture had been seen over the many structures and profound impact on Jerusalem. The Islamic period, furthermore, started with the Islamic conquest of Beytulmakdis and the conquest took place from 634 AH to 644 AH(Schick, 1998). However, the period of the Caliph Umar, the enclave of Masjid al Aqsa witnessed renewing and Caliph Umar bin al-Khattab was interested in these innovations. He restored as the first Muslim musalla praying place in al-Aqsa Mosque that is oriented toward Qiblah(Shammalah, 2019, p. 51) and it was stimulated as the Prophet’s Mosque. During the Umayyad period, the most important thing is the building of the Dome of the Rock which is a magnificent structure representing Muslims became the symbol of Beytulmakdis. Beytulmakdis had entered a different period including the Dome of the Rock in the period of the Crusaders. The city's common area and structure changed with the Crusaders. Hence, The Latin kingdom of Jerusalem was established in Baytulmakdis and the Dome of the Rock was turned into a church which is called "Church of the Holy of Holies”(Shammalah, 2019, p. 54). In the followed Ayyubid period, the city was conquered by the Commander Salah Ad-Din and He particularly restored the area of Al-Aqsa Mosque enclave and especially the Dome of the Rock which was cleansed from all kinds of dirt and rubbish. Salah Ad-Din gave the city a Muslim appearance(Shammalah, 2019, p. 55). After the Ayyubids, the Mamlukes had given great importance and restored the al-Aqsa enclave and the Dome of the Rock. Apart from this, during the Ottoman period, the interest in the region was continued by the Sultans. Especially Solomon the Magnificent made changes in the appearance of the Dome of the Rock(Sevinc, 2016).

Structure feature of the Dome of the Rock[edit]

The rock is in the centre of the Dome of the Rock and is surrounded by two concentric rows of columns enclosed within octagonal walls(Magnis, 2012, p. 351) and it has different boundary walls and eight sides, also “each faces measure 20.6 meters in length and 12.1 meters in height including the 2.6 meters of the parapet”. The outer walls are also in harmony with the octagon. Each wall that has seven windows(AL-RATROUT, 2004, p. 388) including doors are aligned to a different side and each wall has its own central door. According to Routrout, each central door measures “2.55 meters in width and 4.35 in height”. Moreover, since the boundary walls have both a small arched parapet(AL-RATROUT, 2004, p. 383) and belong to the same period, they have been in general harmony. On the other hand, even though the Dome of the Rock has been restored or erection at different times, it sustains its originality in building interior decoration including the dome. But according to Richmond quoted by Rautrot, the exterior mosaic was changed by ceramic tiles in 16AD thus, the exterior original mosaics no longer exist today(AL-RATROUT, 2004, p. 383). Furthermore, interior design and structure of the building have sustained its attractiveness and many different decorative arts were utilized such as wood, mosaic, and stucco(AL-RATROUT, 2004, p. 405). There have eight piers and sixteen marble columns that supported the main arches inside of the Dome of the Rock, and all piers and columns are connected by decorated wooden tie-beams, also, and the wooden tie-beams are surrounded inside the area(AL-RATROUT, 2004, p. 387). The flat surfaces of the interior side of the Dome of the Rock consist of a white marble floor(Kapolony, 2010, p. 68) and plaques. The purpose of the plaques is to show the better patterns, besides on the top of the wall, that is, under the arches, there have mosaics that have gold leaf patterns that covered with colorful mosaics(Magnis, 2012, p. 352). According to Richmond quoted by Routrout, the mosaics were utilized also with glass tesserae and mother-of-pearl(AL-RATROUT, 2004, p. 388). Moreover, Mosaics in the Dome of the Rock are admiring because many mosaics have different motives and patterns and meanings. It can be said that those motifs and patterns are jewelry, cornucopias, and vegetal shape with vases(Grabar, 1959, p. 47). The jeweled motif is located on the inner surface of the octagonal column and it is seen brighter against the light(Grabar, 1959, p. 47). Additionally, some motifs composition like floral(AL-RATROUT, 2004, p. 409) has resembled motifs of other monuments in the Masjid al-Aqsa enclave. The Dome of the Rock' mosaics can be diverse in terms of meaning than they seem. Namely, the tangible shape on the mosaics can have abstract meaning, moreover, they can have the interpretive meaning as the iconographic(AL-RATROUT, 2004, p. 412) that means the mosaics may contain different comments. For instance, according to Oleg Grabar, crowns and jewels also may state an artistic theme of Byzantine origin, which, in an Islamic context, to highlight sacred symbols in the sanctuary and may symbolize Muslims' victory over Christians(Grabar, 1959, p. 52). Another interpretation of the mosaics' meaning according to Rosen-Ayalon quoted by Routrout(AL-RATROUT, 2004, p. 414) their meanings have been described both Paradise and resurrection, also from the Arabic scripts are proved meaning of resurrection and Judgement and the proof is seen that in the Quran 69:17 as the meaning of the day of Resurrection. In addition, the Dome of the Rock makes a difference with its inscription at the inner and exterior octagonal arcade, like its structural feature and spiritual meaning(A.J. Deus, 2013, pp. 34–35). The inscription of arcade proves that the dome of the Rock represents only Muslims and it has not been utilized from Christian or Jews architecture. Moreover, having a magnificent visual structure of the Dome of the Rock has been completed with the Dome which it's named. Besides, it has a roof as a dome which is given details by some scholars. According to them, the dome occurs from sheets of lead and plates of copper gilt, followed by another explanation, the dome consists three-layer which are the first layer is wooden planking decorated with paintings, the second one is bars of iron, the third one is wood covered with sheets(AL-RATROUT, 2004, p. 391). According to Beatrice St. Laurent, the gold-covered dome could be referred to as a sign of the magnificent existence of Islam in the city(St. Laurent, 1998). Besides, According to Kapalony, the dome can be accepted another subject of superiority of Islam over Christianity because the dome of the Rock has a higher dome than the Dome of the Church of the Holy Sepulcher(Kapolony, 2010, p. 65). 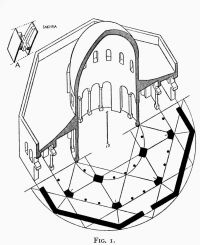 AL-RATROUT, H.F., 2004. QUBBET AL-SAKHRAH (The Dome of the Rock), in: THE ARCHITECTURAL DEVELOPMENT Of AL-AQSA MOSQUE IN ISLAMIC JERUSALEM IN THE EARLY ISLAMIC PERIOD SACRED ARCHITECTURE IN THE SHAPE OF “THE HOLY.” Al-Maktum Institute Academic Press, pp. 405–457.

Magnis, J., 2012. the archological of the Holyearly i. Cambridge University Press, USA.