Al-Buraq Musalla (Arabic: مَسْجِدُ ٱلْبُرَاق - Masjid al-Buraq) is a subterranean mosque next to Al-Buraq Wall, located in the south-west corner of the Masjid al-Aqsa in the Old City of Islamicjerusalem. 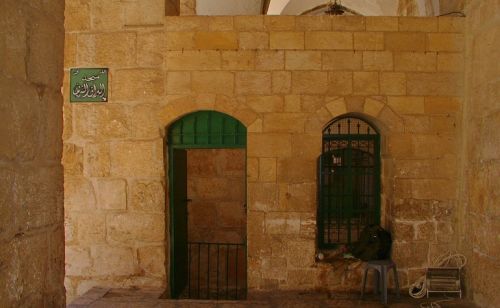 This mosque is called Al-Buraq Mosque because of a ring that is nailed to its wall where Muslims believe Prophet Mohammad (peace be upon him) tied his Al-Buraq carried him from al-Masjid al-Haram to al-Masjid al-Aqsa during the Night Journey of “Al-Isra’ wa Al-Mi’raj.” (PASSIA, 2013) Today it is located inside the vaulted passage that once led to Bab Hittah (Gate of Forgiveness) or Barclay's Gate, which is at the south end of the Buraq Wall. The inside of Bab Hittah (or Barclay’s Gate) which served as an entrance to al-Aqsa Mosque during the early Islamic period is currently known as al-Buraq Mosque. (Al-Ratrout, 2004) The entrance to the underground structure faces north in the immediately left of the Bab al-Magharibah.

Jewish Claims on the Masjid

Temple mount traditionalists calls Bab Hittah or Barclay’s Gate as Kiponus Gate, mentioned as the one western gate of the outer court in the Mishnah (Middoth 3:1). They also suppose that the Kiponus Gate was named after Coponius (A.D 6-9), a Roman Procurator, thus one of the four gates described by Josephus. (Robertson, 2013) Additionally, the gate and the adjacent mosque are supposed to be the place of the cave synagogue frequented by the Jews after returning to Jerusalem from their long banishment. (Sams, 2015) Moreover, there are lots of Jews who doubt the Night Journey and Ascension, one of the key events happened in Prophet’s life. The Qur’an directly indicates this event in Surah Al-Isra: “Exalted is He who took His Servant by night from al-Masjid al-Haram to al-Masjid al-Aqsa, whose surroundings We have blessed, to show him of Our signs. Indeed, He is the Hearing, the Seeing.” (17:1) Today, while some orientalists state that Masjid Al-Aqsa was erected in commemoration of this miraculous event, others claim that neither anyone witnessed that Night Journey, nor did Muhammad show any tangible evident. (Nor, 2011) However, all of the falsifications behind these statements ensue from the inability to comprehend the core sources of Islam: the Qur’an and the hadiths of Prophet. In Qur’an, not only in Surah Al-Isra, but also in lots of verses there are many references all of whom identified with Bait al-Maqdis (Islamicjerusalem) and Al-Aqsa Mosque; such as al-Zaytun (Mount of Olives), mubawwa sidq (safe residence), rabwah (high ground) that qarar (having a meadow) [means the eternal hill]. (Nor, 2011) Therefore, it can be argued that Al-Masjid Al-Aqsa and its total enclave is highly away from the attempts that aim to eliminate the Islamic importance of not only Al-Buraq Musalla but also Al-Buraq Wall and surrounding al-Masjid Al-Aqsa in Bayt al-Maqdis. Today, another problematic situation that the Masjid faces is the Zionist excavations spread in under the Masjid al-Aqsa enclave to reach the so-called aims.

Historical Background of the Masjid 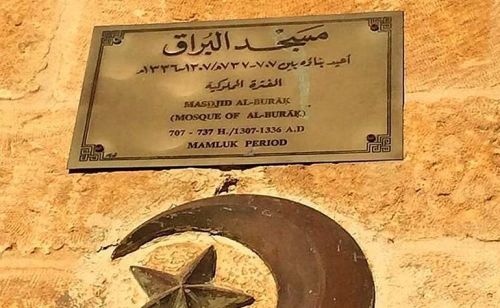 Due to the bilateral relations of Al-Buraq Mosque and Bab Hittah or Barclay's Gate transformed to the masjid, the historical background of one of them can give an approximate way to identify the other. According to Barclay and his followers’ archeological researches especially on the gate, the height and the width of the gate are known, which can also give an opinion about the masjid. The gate measuring 5.06 metres in width and 8.80 metres in height of the doorway (Al-Ratrout, 2004) provides insight into the dimensions of the masjid. According to archeological views; it can be concluded that this gate was used as an entrance gate to Al-Aqsa Mosque during the Umayyad period, in connection with structural features, such as the chamfered edge as a distinctive feature of all Umayyad gates leading to the enclave. (Al-Ratrout, 2004) According to the architectural elements in Al-Buraq Mosque and its gate, which is also exist in also the Golden Gate (Al-Rahma) and the Double Gate, show its historical traces dated to Umayyad period. Besides, a sign outside Al-Buraq Musalla indicates that this monumunet dates back to Mamluk period. Overall, the gate passage was in use until some time after 985 AD when it was blocked and changed into a cistern adjacent to Al-Buraq Mosque. (Al-Ratrout, 2004) Even though the main gate of Al-Buraq Mosque located in Western Wall of Masjid Al-Aqsa is permanently sealed, still the mosque is open for prayers use from another entrance located in Al-Aqsa’s western corridor. (PASSIA, 2013)