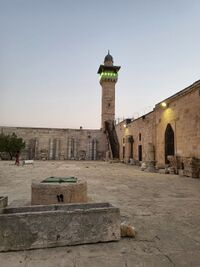 The Al-Fakhriyyah Minaret (Arabic: مئذنة الفخرية) was built around 690 AH (1278 AD) by order of Mamluk Sultan Lajin. It was built in the South Western corner of Masjid Al Aqsa into the outer wall where the Islamic Museum and Al Aqsa Library/Women's Masjid intersect and is the first of Masjid Al Aqsa's four existing minarets to be built. 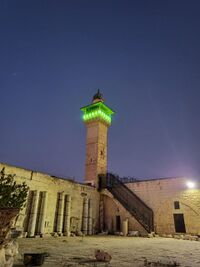 The minaret was named after Fakhr al-Din al-Khalili, the father of Sharif al-Din Abd al-Rahman, who supervised the minarets's construction.

Al-Fakhriyyah Minaret was built in the traditional Syrian style, with a square-shaped base and shaft. It stands 23-meters high and is the shortest of Masjid Al Aqsa's minarets. The minaret has no foundations and is divided by moldings into three floors, above which two rows of muqarnas decorate the muezzin's balcony. The niche is surrounded by a square chamber that is topped by a lead-covered stone dome.

It has a northern facing entrance which can be reached by a stone ladder located in the south-western corner of Masjid Al Aqsa, at the junction of the Islamic Museum and Women’s Masjid.

Masjid Al Aqsa had 4 minarets before Crusader rule, including one that stood approximately where Al-Fakhriyyah Minaret stands today. The Mamluks built or renovated eight major minarets in Al Quds (English: Jerusalem, Literal Translation: The Holy), including Al-Fakhriyyah Minaret, after they defeated the Crusaders and conquered the city, in an effort to reclaim the Islamic identity of the city after many decades of European occupation. The minaret was rebuilt during the Ottoman period in 1339 AH (1920 AD).

The top of the minaret was damaged in an earthquake that hit Al Quds in 1340 AH (1922 AD) and was repaired by the Islamic Supreme Council who also added a dome atop it. The dome was later covered with lead sheets by the Hashemite Fund for the Restoration of Masjid Al-Aqsa.