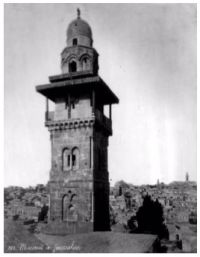 It is a square-shaped minaret located near Bani Ghanim’s Gate which is considered the most decorated of Al-Aqsa’s minarets. With a height of 38.5 meters, it is the highest minaret inside Al-Aqsa with a staircase of 120 steps. The western tunnel which was dug by the Israeli Occupation Forces has weakened the minaret’s foundations which called for its renovation in 2001.

Structure of the Minaret The Ghawanima minaret, almost entirely built of stone, apart from a timber canopy over the muezzin's gallery, is one of the sturdiest and highest constructions in the old city of Bayt al-Maqdis. Its firm structure has left it nearly untouched by earthquakes, while its varied decoration had lent it a certain elegance as a counterpoint to its solidity (Hadi, 2013, TIKA).

The minaret is excavated into the naturally occurring layer of bedrock in the northwest corner of the Haram. It is partitioned into several 'stories' by stone molding and muqarnas (stalactite) galleries. The first two stories are wider and directly about the rock, forming the base of the tower. Additional four stories, including the muezzin's gallery, are surmounted by a circular drum and bulbous dome. The stairway is external on the first two floors but becomes an internal spiral structure until it reaches the muezzin's gallery, from which the call for prayer was performed (Burgoyne, 1987).