From ISLAMICJERUSALEM–Wiki
Revision as of 08:34, 4 November 2022 by Isravakfi (talk | contribs) (Created page with "300px|thumb|right|Al-Magharibah Gate from inside the Masjid Al-Aqsa (Photo by ''gzt.com'') '''Bab al-Magharibah''' or the Gate of the Mo...")
(diff) ← Older revision | Latest revision (diff) | Newer revision → (diff)
Jump to navigation Jump to search 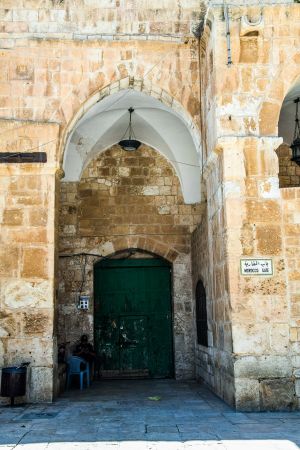 Al-Magharibah Gate from inside the Masjid Al-Aqsa (Photo by gzt.com)

Bab al-Magharibah or the Gate of the Moors (Arabic: باب المغاربة‎ Bab al-Magharbeh‎), one of the 15 gates of Masjid Al-Aqsa, is currently the only one that has been completely closed to the use of Muslims. It is located in Al-Aqsa Mosque’s western wall (Al-Buraq Wall). Bab al-Magharibah was rebuilt during the Ayyubid period and renovated and connected to the western section of the Aqsa Mosque enclave during the Mamluk rule. (Jubeh, 2019) The gate was endowed to the inhabitants of the quarter who were Ahl al-ard of Maghrib. From this period, people began to live side by side in Islamicjerusalem until the time when they were dispersed by the quarter's demolition.

It is necessary to differentiate between Al-Masjid Al-Aqsa gate called as Bab al-Maghariba and the southern Old City gate of the same name which is also known as The Dung Gate or Mughrabi Gate (Arabic: باب المغاربة‎ Bab al-Maghariba), or Silwan Gate. On the other hand, both of these gates are connected to the al-Maghariba Quarter. This means that Bab al-Maghariba of the Masjid leads from al-Maghariba Quarter to al-Aqsa Mosque enclave, while the other one leads from outside the southern walls into the Old City via al-Maghariba Quarter. Bab al-Magharibah of the Masjid is located in the southern section of the western wall of al-Aqsa Mosque, and previously it was used by the residents of the Magharibah Quarter which was razed to the ground by Israeli bulldozers in June 1967. (Jubeh, 2019) The Moroccan Quarter, a junction between the Masjid and the southern neighborhoods like Silwan, was demolished by the Israeli Occupation Forces in 1967 with the purpose of constructing the Wailing Wall Plaza for the Jews who pray in front of Al-Buraq Wall. (PASSIA, 2013) Furthermore, the next step of the Israeli forces was to ban Muslims from using this door by alleging that they were threatening security. Although the keys to the "Masjid Al-Aqsa Gates" are the properties of the Islamic Waqf organization, the keys of al-Magharibah gate seized by the Israeli occupation forces in 1967 have still not been handed over to Muslims today.

All in all, today Bab al-Magharibah is closed to Muslims and became a gate where non-Muslims, especially Jews, are permitted to enter through, which gives rise to Israeli settlers’ swarm within the Al-Aqsa complex.