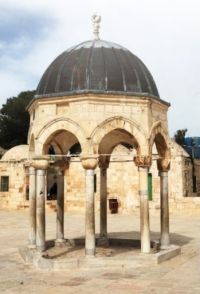 The Dome of the Spirits is a small octagonal dome located on the Dome of the Rock’s courtyard. It is based on eight marble columns attached to eight arches carrying the dome’s drum. This is a small dome resting on a hexagonal base.

Location of the monument

History of the structure 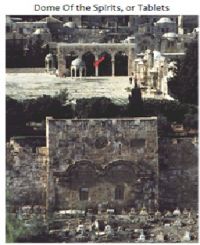 Meaning of the name

Several theories exist concerning the name of this building. It was called the “Spirits Dome” because of its close location to a cave called the “Spirits Cave”. It could be associated with the proximity of the cave of the spirits or according to a legend, the souls of the dead will be gathered there for prayers. Its other name, the Dome of Tablets, comes from the tablets of the Stone, alleged kept in the Ark of the Covenant in Biblical tradition. The Dome of the Spirits stands above-exposed bedrock on the “Temple Mount” in Jewish tradition and it is just a little lower than es-Sakhra which is under the Dome of the Rock. Asher S. Kaufman takes the view that alleged Herod’s Temple (the second temple) was located over the “Dome of the Tablets”, also known as the Dome of the Spirits (Kaufman, 2004). This Islamic structure is suggested to be connected with the Holy of Holies of the alleged Jewish Temple. According to some sources “The Temple in Jerusalem” was not located over the Dome of Tablets. (https://www.bible.ca/archeology/bible-archeology-jerusalem-temple-mount-dome-of-tablets.htm)

Kaufman, Asher S, 2004. “The Temple Mount: Where is the Holy of Holies” Har YErA Eh Press.