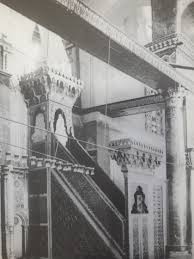 In the name of Good, the Merciful, the Compassionate. Ordered its work the servant in need of the mercy of God, the one thankful for his grace, the fighter in the holy war for His cause, the fighter in the garrisons against the enemies of His religion, the just king Nur al-Din, the support of Islam and the Muslims, the one who treats with justice the oppressed against the oppressors, Abu al-Qasim Mahmud ibn Zinki ibn Aq-Sunqur, the helper of the Commander of the Faithful, may God glorify his victories and make his power last and raise high signs and raise up his banners and flags on the heights and glorify the leaders of his state and humble the unbelievers in his grace and open to him and by his hand and refresh his eyes with victory and bringing him near to Your mercy. O Lord of the two worlds. And that in the months of the year 4 and 60 and 500.

In 1969, Dennis Michael Rohan, an Australian Christian Zionist, set Al-Aqsa Mosque on fire; the historical pulpit was destroyed completely (Ghosheh, 2005). It was temporarily replaced with a simpler one until an identical pulpit was built in Jordan using the same original materials, which was brought to Islamicjerusalem in 2007 to be placed inside Al-Jami al-Aqsa (Ghosheh, 2005). On the other hand, this fire had a great impact in the Islamic world and caused the Islamic countries to gather and establish the Organization of the Islamic Conference all over the world (Oran, 2015). The original minbar's remains are display on in the Islamic Museum (Ghosheh, 2005). 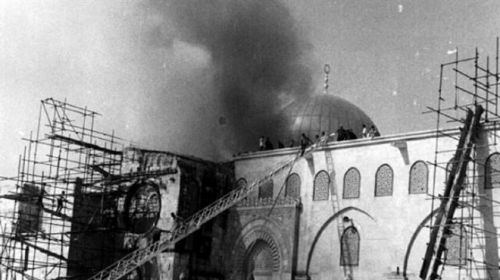 The fire in 1969. (Photo by islamiclandmarks.com/)