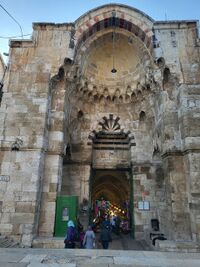 Bab Al Qattanin (Arabic: باب القطانين English: Gate of the Cotton Merchants) is the most richly decorated and in turn the most easily recognisable of Masjid Al Aqsa's gates. It stands approximately in the middle of the outer western wall of Al Aqsa. 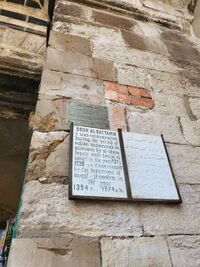 Plaque at the door of Bab Al Qattanin.

The gate was built in 737 AH (1336 AD) during the rule of Mamluk Sultan an-Nasir Muhammad ibn Qalawun, under the supervision of Emir Seyfeddin Tankiz, the then governor of Damascus. The 14th-century historian Al Umari explained that the gate was constructed in order to link Masjid Al Aqsa's enclave with the Al Qattanin Suq (English: Cotton Merchant's Market), which was also built by Emir Tankiz around the same time and is where the name of the gate was derived. More recently it was renovated in 1394 AH (1974 AD) by the Department of Awqaf Jerusalem.

The gate is lower than the interior courtyard of Masjid Al Aqsa and there are ten descending steps to reach the gate from its eastern side. There are also a number of ascending steps when the gate is approached from its western side in the Old City.

The ornate face of the gate is an Iwan (a vaulted rectangular space, walled on three sides, with one end open). It features five rows of Muqarnas (honeycomb patterns or moldings carved in stone) which decorate the area that joins the main body of the wall to the semi-dome that tops the gate. There is a 4-metre high rectangular door set into the gate that is decorated with a trefoil shaped arch. A small window that used to sit above the door was blocked in 1927. Ablaq (alternating bricks of red/black and cream) patterns feature throughout the gate. 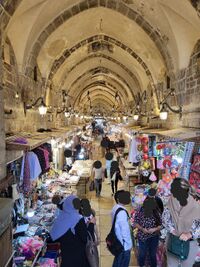 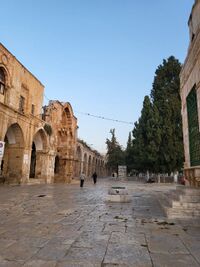 Bab Al Qattanin as seen from the Western corridor of Masjid Al Aqsa.

The Gate's western environs are dominated by the Suq or 'street market' which features rows of terraced shops that run the entire length of the street (95 metres) upto the gate.

There are a number of madrassas dotted around Bab Al Qattanin in the western wall of Al Aqsa. The Cotton Merchants platform, Ali Pasha platform and Qaitabay public fountain and well are some of the structures that stand closest to the gate in the western corridor of Masjid Al Aqsa.

Bab Al Qattanin is mainly used by Muslim worshippers who enter the Old City through Bab Al Khalil (Jaffa Gate). The gate is closed during Fajr and Esha prayers.

Sometime in the 19th century the gate started to garner interest among some members of the Jewish community who began to occasionally congregate at it's entrance on the side of the Old City to perform rituals or prayers.