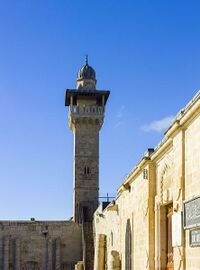 Mamluks adopted to rebuild minarets to Islamize the city after the Crusaders, which were there before the Crusader period as it has been documented by travelers and early historians. Ibn al-Faqih al-Hamadani (3-4 AH/9-10th century AD) in his Mukhtasar Kitab al-Buldan and Shihab al-Din Ahmad ibn Muhammad ibn 'Abd Rabbihi (3-4 AH/9-10th century AD) in his Kitab al-Iqd al-Farid describe the Bayt al-Maqdis before the Crusaders had four minarets (Al-Smadi, 2001, p.41). It can be inferred that the Mamluks have rebuilt this minaret. Namely a half-year (????) after the liberation of Bayt al-Maqdis, the Mamluks built new and reconstructed a totla of eight major minarets in the Holy City (Smith, 2013, p. 13). The al-Fakhriyyah minaret was one of the Mamluks Minarets.

The minaret is located at the junction of the southern wall and western wall(Patel, 2006). The minaret was built on the solid part of the wall (Kapolony, 2010, p. 281). Al-Fakhriyyah Minaret was built by judge Sharaf Ad-Din bin Abdul Rahman Bin As-Sahib (Passia, 2013, p. 37). The minaret was rebuilt following the Ottoman period in 1920 (Patel, 2006). The Dating of the minarets has been done according to the style and shape. Mamluk minarets generally have a square shape (Zohar et al., 2015, p. 240) and the Mamluk minarets have been surrounding the Al-Aqsa Mosque or Haram al-Sharif. Thus, the al-Fakhriyyah Minaret has been built in a square shape with a muezzin’s balcony and the balcony is decorated with muqarnas <ref>https://www.encyclopedia.com/science/encyclopedias-almanacs-transcripts-and-maps/muqarnas-key-component-islamic-architecture date of access:4/11/2020</ref>. Following the damage to the Minaret after the Jerusalem earthquake in 1922, the Minaret' dome was covered with lead (Passia, 2013, p. 37).