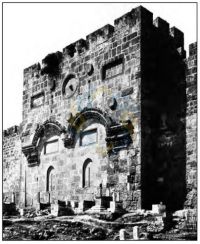 The magnificent structure at the eastern wall of al-Masjid al-Aqsa (al-Aqsa enclave). The gate is the only eastern gate of Masjid al-Aqsa. It is one of the oldest gates of al-Aqsa, dates back to the Umayyad period in terms of elements architectural and artistic. The Bab al-Rahmah Cemetery is located just out of the enclave in front of the gate.

Meaning of the Name

In Muslim tradition, the name of this gate is associated with the Day of Judgement. The other name, the Golden Gate, is based on the Christian tradition that Jesus made his last entry to Islamicjerusalem through this gate. In Jewish tradition, however, the Messiah will enter the city through this gate. Indeed, both of the two names have a religious meaning, which indicates how significant the gate is. It was built by Solomon in Jewish and Christian tradition (Kapalony, 2002). But there is no evidence of that about archaeological and historical.

The History of the Gate

The history of the gate has always been in dispute. The vast majority of the 19th and early 20th century scholars such as Robinson, Conder, Bartlett, Vincent and Abel, Melchior de Vogüé and Creswell dated the gate to different periods prior to the Islamic period. Latterly, in the light of developing research, new arguments have been advanced by many scholars such as Hamilton, Sharon, Ben-Dov, Rozen Ayalon, Tsafrir and Wilkinson that the gate should be dated to the 7th–8th century AD, to the Umayyad period (Ratrout, 2004, p. 263).

The Structure of the Gate

The gate represents a rectangular stonework structure with two decorated facades. Unlike other gates in al-Aqsa enclave, the eastern facade was not built as part of the wall of the enclave but was shifted 2.00 meters out of the wall. Bab al-Rahmah is a double gate. The two bays are reflected in its plan and main elevations; two doorways are followed by a double passage covered by three pairs of domes. Originally, the eastern facade of Bab al-Rahmah has two large doorways, separated by a column. Each doorway measures 3.90 meters in width, supporting a semicircular arch with a decorated frieze. The doorways in the eastern facade were blocked up in the Ottoman period. It is noticed that some features in the decoration of Bab al-Rahmah bear a close resemblance to the decoration in other non-Muslim buildings that existed in Historical Syria. The openings of Bab al-Rahmah lead to a rectangular domed vestibule, measuring 20.37 meters in length and 10.50 meters in width. At that time, the hall consisted of six shallow domes, which have elliptical shapes, two of which were changed later. These domes are separated by arches of an elliptical shape springing from two pilasters at the entrances and two central columns. Each dome in Bab al-Rahmah is constructed over a square plan, so special stones are required to form the successive stone circles that form the dome. Architecturally, the spatial treatment of the gate is somewhat interesting; shifting the facade 2 meters out of the wall indicates a clear definition of its location. The most important question concerning this gate is a matter of motive (Ratrout, 2004).

Symbolises a Gate in Paradise

Since the early times of Muslim rule over Islamicjerusalem, some Muslims, such as ‘Ubadah ibn al-Samit, linked the eastern wall of the enclave with the Last Day. According to Ibn Kathir, this wall is not the wall mentioned in the Quranic verse “so a wall will be put up betwixt them, with a gate therein” [57:13], but it was mentioned by some commentators as an example for the clarification of the meaning of the verse. Since that time, this example probably encouraged Muslims to bury their dead immediately outside the eastern wall of the al-Aqsa enclave. In any case, if the name “al-Rahmah” (Mercy) truly exists since the construction of the gate, this suggests that the gate is part of an overall concept based on the idea related to the place, specifically the Rock, as that of the Last Day. Then it can be argued that Bab al-Rahmah symbolizes a gate in paradise or entry to Mercy (Ratrout, 2004, p. 293). Whatever the construction motive of Bab al-Rahmah might have been, it was built during the early Islamic period, and it is the most significant gate of the enclave (Ratrout, 2004, p. 295).

The Sealing of the gate

Closed by the Muslims in 810, reopened in 1102 by the Crusaders, it was walled up by Salah al-Din after regaining Islamicjerusalem in 1187. Ottoman Sultan Sulaiman the Magnificent rebuilt it together with the city walls but walled it up in 1541, and it stayed that way (Price, 2013). The closure of the Gate by the Sultan Salah al-Din after the liberation of Jerusalem in 1187 AD in order to protect the city and the mosque from any possible invasion or to prevent the Valley of Hell from outside the Gate and the Al-Aqsa Mosque and the gates remained closed until then Ottoman period where it was decided to completely block the stone in an attempt to get rid of the rumor or legend that the Franks will return from that Gate. According to another opinion rather than direct access to the mosque yet visit the graves of companions buried near the Gate.

A Zionist claim that Bab Al Rahmah and Al Tawba is Jewish heritage, and it is considered one of the gates of the alleged temple. In the 1967 war, the Zionist war minister (Moshe Dayan) attempted to open the Gate but failed. The Bab al-Rahmah Mosque was closed for Muslim worshippers by the Israeli authorities in 2003. In 2017, an Israeli court renewed the closure order. For the first time since 2003, Palestinian worshippers entered the Bab al-Rahmah (Gate of Mercy) area of the Al-Aqsa Mosque compound in Feb 2019. Hundreds of worshippers, led by the Grand Mufti of Jerusalem Sheikh Mohammad Hussein, forced their way into the area ahead of the weekly Friday prayers, defying the 16-year Israeli ban on Muslim worship in the area. The act of defiance comes amid heightened tension between Palestinians and Israelis, as Israeli forces attacked Palestinian Muslim worshippers inside the Al-Aqsa mosque, leaving many of them wounded and arresting others. Israeli police briefly shut the Al-Aqsa's Al-Rahma Gate, triggering Palestinian protests the following day.

Ratrout, Heitham, 2004. The Architectural Development of al-Aqsa Mosque In Islamic Jerusalem In The Early Islamic Period Sacred Architecture in the Shape of ‘The Holy’, Al-Maktum Institute Academic Press.