Dome of the Cradle of Jesus 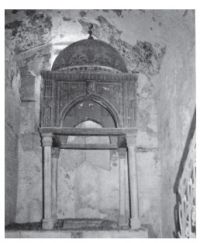 Mahd Issa or Cradle of Jesus

The Structure of the Dome

This site is a small rectangular room (4.40 x 7.40 meters) which is used as a place of Salah (Muslim worship). An additional alcove has been opened and is used as a window. The room's vaults originate from a relatively later period and are made of small stones. Above the "cradle" is a dome supported by four marble pillars, most probably installed during the Fatimid era. It was rebuilt by the Muslims most probably during the era of Sultan Suleiman the Magnificent. The traveler Nasir Khusraw mentioned this site in 413 AH / 1047 AD. The Cordovan poet Ibn ‘Abid Rabbih (860–940) confirmed the association between “the oratory of Mary” and the cradle in Islamicjerusalem (Matar, 2017, p.112).

The marble alcove originating from the early Byzantine period when it was possibly a setting for a statue of some sort. The recess in the floor underneath the dome is the purported Cradle of Jesus, this alcove is arched in shape and refined at its borders in the shape of a conch shell, (1x1.60 meters). Stairs leading to the south-eastern chamber (grill in the upper left) commonly known as the Maqam e Maryam Oratory of the Virgin Mary inside the al-Marwani Mosque. This is a small room containing a domed cavity in the floor, according to the tradition, this is the site of the cradle of Jesus, where Mary placed him at the age of 40 days. This episode is mentioned in the Gospel according to Luke (Luke 2:23–24). The small chamber has three windows made of stained glass, overlooking Kidron Valley. Access to this area by a winding staircase containing 32 stairs.

Another tradition mentions that below this area is a crypt where the wooden cradle of the highly worshiped Jesus is reserved. This door is in the western wall, now blocked, allows entry from Solomon's stables. According to the decorations on this door, it is related to the Byzantine period. This name was given to this monument to commemorate the birth of Prophet Jesus, peace be upon him. The name "Jesus' Cradle" indicates that this location was considered holy by the Christians and it is possible that here stood a church. It is told that here he customarily hosted Miriam and Jesus in great honor, and gave them to eat. This is what he did the night after Jesus was 40 days old and then presented him to the sanctuary. (Sagiv, 1996)