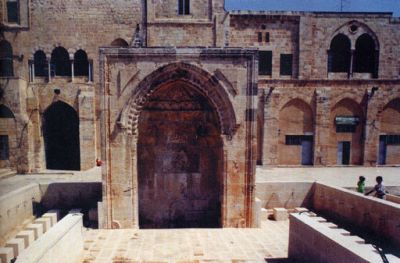 "The distribution of Sabil in Jerusalem extends from the nucleus (al- Aqsa Mosque) to the surrounding city and beyond"(Sasson, 2012) Fountains are as important as other monuments because they shed light on the political structure, architectural structure, technology, and art of the time(Assetto et al., 2010). One of the fountains made during the period of Sultan Sulayman I. was the fountain of Sulayman. The fountain, which was built by Sultan Sulayman in about 1537AD and named after the Sultan, is also known as Sabil Bab al-‘Attim<ref>The date of access: 4/15/2020 https://madainproject.com/fountains_in_jerusalem</ref>. According to the inscription of Sulayman fountain, it was the fourth fountain that was made among the other fountains in the time of Sulayman I<ref>The date of access: 4/15/2020 http://web.i2ud.org/jerusalem/priv/html3/monuments/sites/t168_sabil_bab-alatm/index.html</ref>. The Fountain Sultan Sulayman I is located on the northern part of the al-Aqsa Mosque or Haram al-Sharif enclave and to the south side of Bab al-‘Attim and next to the Hitta Gate. Another fountain was build during this period to the west side of the enclave known as Sabil Qasim Pasha. During the period of Sultan Sulayman, the public fountains were built to provide water to the residents and pilgrims of the city, as a proof of that, the Fountain of Sulayman was built as ablution fountain(Assetto et al., 2010). Moreover, the Fountain of Sulayman is accepted as an aqueduct and it has been a freestanding(Sasson, 2012) structure. Thanks to the aqueduct which is Qanat al-Sabil, in the Sulayman pool, was brought water to many Sabil in al-Aqsa Mosque/ Haram al-Sharif (Vincent, 2000, p. 138).

The Architecture of the Fountain of Sulayman[edit]

The fountain of Sulayman consists of a block that forms a rectangular wall it’s decorated with white malaki stone. The base of the building is located below the ground level of masjid al-Aqsa to flow water from the near channel to the fountain<ref>The date of access: 4/15/2020 http://web.i2ud.org/jerusalem/priv/html3/monuments/sites/t168_sabil_bab-alatm/index.html</ref>. This fountain also has a mihrab, but the mihrab has a rather plain appearance that is not decorated<ref>The date of access: 4/15/2020 http://web.i2ud.org/jerusalem/priv/html3/monuments/sites/t168_sabil_bab-alatm/index.html</ref>, on the contrary, there are small carved ornaments in front of the columns extending from both sides, also It has a square-shaped counter called Mastaba to the north of the Sabil. The Fountain has a carved niche with an inscription that testifies that Sultan Suleiman "ordered the building of this blessed fountain<ref>The date of access: 4/16/2020 https://projects.jerusalemfoundation.org/heritage/preservation/sabil-of-suleiman-the-magnificent.aspx</ref>.

Sasson, A., 2012. SABILS (WATER FOUNTAINS) OF JERUSALEM FROM THE MEDIEVAL PERIOD TO THE TWENTIETH CENTURY.