Mihrab of Zakariyya is a masterpiece prayer niche located in the eastern part of Masjid al-Qibly adjacent to the southern wall of the Masjid Al-Aqsa enclave. This is the place where Prophet Zakariya, who took care and nurtured Maryam, took her to his prayer place and came to her at certain intervals in Masjid Al-Aqsa, according to the Qur'anic verses. 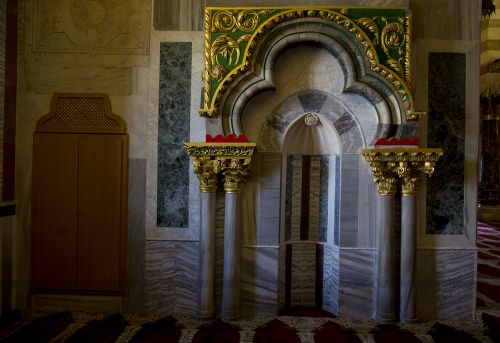 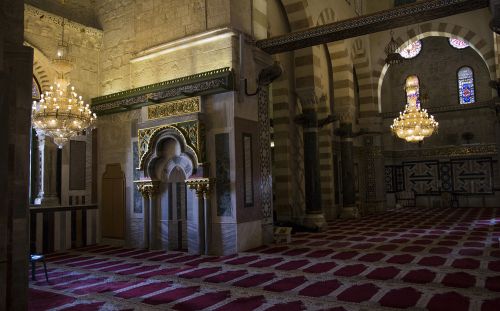 Zakariya, whose name is mentioned in six places in the Qur'an (Q: 3:37-38, 6:85, 19:2-7, 21:89), is described as a person whose prayer is accepted, who runs to good deeds (Q: 21:90), who prays (Q: 3:39), who protects Maryam (Q: 3:37) and is a servant of Allah (Q: 19:2). Although it is mentioned in the sources that Zakariya was descended from David and Solomon, there are differences in his family tree. (Aydın, 2013) He had lineage with prophets Harun and Musa, the sons of Imran (of previous generation). He was married to the sister of Hannah, mother of Maryam and wife of Imran whose family was by Allah above the alameen. (Rahman, 2018) It is stated in Islamic sources about the death of Zakariya, who was narrated to worked as a carpenter in a hadith, that he was martyred just like his son Yahya. (Aydın, 2013) According to this, Zakariya, who had fled the region after Yahya was executed by Herod the Great, hid in the hollow of a broken tree, but the devil left out one side of his robe, then informed his enemies, so they cut the tree in half, and thus Zakariya was martyred. His people, the Israelites, were not only ignorant to the teachings of their prophet but tortured him also. (Q: 3:21) It is narrated that his tomb is located next to Aleppo Great Mosque.

Apart from this, there are thirty-one people mentioned with this name in the Bible: One of them is Zakariya, the father of Yahya, who is described as a Jewish priest in the Gospel of Luke, and is described also in the Qur'an as a prophet sent to the Jews. The other is the one ordained as a prophet under the rule of the Persian King Darius, who took control of the Palestinian region after the Babylonian exile, and he has a book called his own in the Old Testament, which has no concern with Zakariya mentioned in the Qur'an. (Aydın, 2013) There is no relation of them with neither Qur'an nor the monument that is called as Mihrab Zakariya.

The root of the word comes from Arabic meaning ‘war’, which is connected by great effort and fighting to reach or protect or defend important places. Besides, the Arabic word “mihrab” meaning ‘the harem part of the palace or the part of the throne of the ruler, the statue cell of the Christian saints, gazebo, pavilion, high ground, the head side of the assembly, the most honorable part’ has been used for the place where the Imam stood in mosques in time. (Erzincan, 2005) The word mihrab is mentioned in four places in the Qur'an: In three of these (Q: 3:37-39, 19:11); Zakariya's entrance and exit to the private place (mihrab) in the masjid, and his prayer there, and in the other, David's private compartment (mihrab) in the masjid, and the arrival of two people to resolve the conflict between them, are mentioned. It is understood that the mihrab in the verses refers to a special place in the masjid (Beytülmakdis). Meharib, the plural of the mihrab, which is mentioned in a verse of Surat Saba’ (Q: 34:13), is described as “high and magnificent buildings, high places sheltered, epitomes, pavilion, palaces”. (Yazır, 1979 – es-Sabunî, 1990) The origin of the mihrab dates to the Prophet time. It is known that there was no mihrab of the Masjid Al-Nabawi at the early times and that only the place where the Prophet Muhammed led the prayer was evident. Later, the development of the mihrab, which is considered one of the most important elements of religious architecture, in Islamic art, has spread over a long period.

It was built to commemorate Prophet Zakariya who was a custodian of the Masjid al-Aqsa according to the Qur’anic narration. (Q: 19:11, 3:37) This space is also said to be the place Maryam was lodged and visited by Zakariyya, but there is no solid evidence for this. Besides, a calligraphy on the top of the Mihrab is referring to the Qur’anic verses, Surah Maryam (Q: 19: 1-6) which mentions Prophet Zakariyya's supplication to his Lord.

The Mihrab of the Prophet, [Online] Available at: https://holyhijaz.wordpress.com/the-mihrab-of-the-prophet-salallahu-alayhi-wasalam/ (Accessed 23 April 2020)