The Prophets Gate or the Double Gate is one of the permanently closed gates along the Southern wall of Al Aqsa Compound. The Gate was used by the Umayyad Caliphs when they would visit Al Aqsa Mosque from their palaces to the south of the compound. 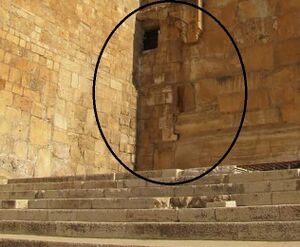 According to madainproject.com, The Prophets Gate was blocked by the construction of a tower in front of it, during the Fatimid or Ayyubid era.

This gate is located around 100 metres from the South Western corner of the Compound. According to Khusru, Bab al Nabi was named as such because it was believed to be the place that the Prophet Muhammed entered Al Aqsa on the night of Isra and Miraj. Since the 19th Century according to Ratrout, the name “Double Gate” was given due to the two rectangular doorways which opened up into the long tunnel leading to the “Ancient Mosque” or “Al Aqsa Qadeem”. The Gateway enters into a long tunnel which measures more than 77 metres towards the north from the Southern wall. On the side of the doorways, above the arch there are floral engravings which according to Ben-Dov 1985, p138 is an “arch in the style of the Muslim Period”

According to Ratrout, p256,[37] Bab Al Nabi leads to a square domed vestibule which then leads to a flight of stairs leading to a double passage tunnel up to the level of the compound. The tunnel according to Ratrout during the early Islamic Period was much shorter but was extended to the north by the Abbasid Caliphs Al Mansur and Al Mahdi in 154-163 AH/ 771-780 AD.

HAITHEM FATHI AL-RATROUT, July 2002 THE ARCHITECTURAL DEVELOPMENT Of AL-AQSA MOSQUE IN ISLAMICJERUSALEM IN THE EARLY ISLAMIC PERIOD SACRED ARCHITECTURE IN THE SHAPE OF "THE HOLY" Thesis DEPARTMENT OF ARCHITECTURE AND BUILDING SCIENCE, UNIVERSITY OF STRATHCLYDE, GLASGOW, UK