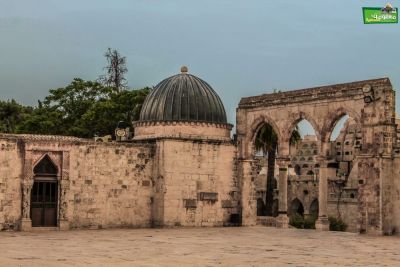 The Dome of Nahawiah was rebuilt the Eyyubi era probably between1169-1250. (Yilmaz, 2018, pp. 9–10). The Dome of Nahawiyah is a structure that is added to Madrasa al-Nahawiyah. That means the name was given to the dome due to the madrasah. It has been used for different purposes over the centuries. The Dome of Nahawiyah means grammar(Passia, 2013a, p. 29). Also, The place is allocated for the science of Nahiw(Passia, 2013a, p. 29). Namely, Ulema and Sufis were spending time in this place within seclusion and worship(Ugurluel, n.d.). It was founded to teach the Arabic language and to collect the knowledge of the Nahiw<ref>Date of access: 4-7-2020 https://www.gzt.com/video/kudus/nahiv-kubbesi--mescid-i-aksa-2177477</ref> and teachers of the Dome of Nahiwiyah had to be from the Hanafi sect(Gozutok, 2012). Besides, there is no information in the sources about who is the first instructor of the madrasa but Taqi al-Din Abubakar b. Isa taught at the Nahawiyah madrasa during the Mamluks(Yilmaz, 2018, p. 9)

The architecture of the Dome[edit]

According to location, it takes place in the southwestern corner of al- Aqsa enclave(Ugurluel, n.d., p. 327). The Dome of Nahawiyah consists of a community of buildings and there are two rooms inside, also it has two domes at both ends(Passia, 2013). Besides, Nahawiyya Madrasa is located under the west domed chamber zone of transition(Hillenbrand, 2009, p. 40). Moreover, the monument has a two-floor structure; the first floor lies on the top of the rock and the lower floor extends from the edge of the rock to the ground. However, the lower floor is adjacent to the rock(Ugurluel, n.d., p. 327). The entrance of the building is located on the north facade and the entrance of the building starts with the hall. Moreover, there have two marble columns that have lettering in the hall(Passia, 2013, p. 29). There are auger-shaped columns from the Crusaders period on both sides of the monument's north-faced door and the door was rebuilt between 1187-1199(Jarrar, 1998). There has an inscription from the Ottoman period on the northwest wall of Nahawiyah madrasa. The inscription belongs to a water fountain that has not survived to the present day, also the name of the person who built the water fountain is written in the inscription(Ugurluel, n.d., p. 329). Besides, One of the Umayyad architecture techniques is to decorate as a scalloped form and Nahawiyah madrasah and dome have witnessed such decoration(Hillenbrand, 2009, p. 40).