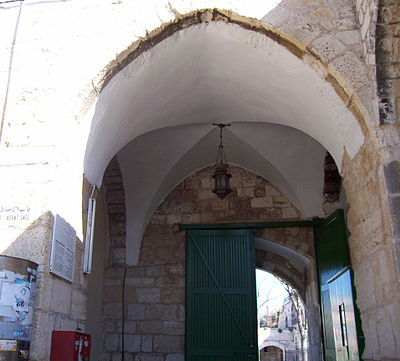 Masjid al Aqsa has gates which are some of them open and some of them closed. They are under the control of the Directorate of Islamic Foundations from the inside of the Al-Aqsa Mosque and Israeli control from the outside.

This gate previously known as the Gate of Gate of Mihrab Zakariyya, today is known as Bab al- Asbat which is translated as Tribes Gate in reference to the Children of Israel or Yaqub who left Egypt with Prophet Moses and headed to Bayt al-Maqdis to find the promised land (Ugurluel, n.d., p. 31). It is today located to the east of the short northern side of the al-Aqsa Mosque enclave. Behind the gate, there is also a road known as the Lions' gate in the Old City. The Tribes Gate according to what is mentioned in some source, is known as the gate of the tribes of the Israelites who entered Beytulmakdis in different periods under the leadership of Prophet David, after leaving egypt with Prophet Moses(Kapolony, 2010, p. 630). Also the name might have been affected by the eschatological gates called after the Tribes of Israel (Kapolony, 2010, p. 274). Namely, After the victory of Talut, and his army including Prophet David the Israelites conquered Jerusalem in 1000 BC and it is said they have entered through this gate, besides it is said that when the Prophet Moses and his people migrated from Egypt towards Beytulmakdis, they entered the city through this gate(Ugurluel, n.d., p. 33). Most of this information can not be confirmed and it is very unlikley that this part of the city exsisted at the time, but the Muslims after rebuilding the al-Aqsa Mosque enclave used this name to associate it with these incidents.

The outer city gate is also known as Asbat Gate or St. Stephen's Gate (Kidis Stefanos) or Sitti Mary Gate (Kose, 2017, p. 31), which leads to the Asbat Gate of al-Aqsa. Also, it is claimed that there have pieces according to the Christian religion. Namely, “Protomartyr”, who was accepted as the first Christian martyr, was martyred near this gate and it has been claimed to be the home of the mother Mary on the right side of the door<ref>https://www.biblewalks.com/lionsgate date of access: 4/5/2020</ref>. Furthermore, according to Nasir Khisrow, the Gate was called the Gate of Birkat Bani Israel (Pool of the Israelites) which is located in the northernmost side of the enclave(Strange, 1890, p. 185). In the early Muslim period Gate of Asbat was further west and this gate was known as the Gate of Mihrab Zakariyya - the Gate of Zakariyya Niche (Al- Ratrout, 2002, p. 312).

This gate is one of the important ancient gates of al-Aqsa Mosque and the gate's names had been changes most likley after the crusades and in the early Muslim period had been given a different name by Ibn al Fakih and Ibn Abd' Rabbih two earliest authorities (Strange, 1890, p. 185). The gate had been used in the early Islamic period and it does not continue to carry the ealrier name today Gate of Mihrab Zakariyya - the Gate of Zakariyya Niche (Al- Ratrouth, 2002, p. 312). The gate was renewed by Sultan Süleyman I during the Ottoman period. According to a legend, Sultan Suleyman I, who had a dream, is claimed to have started to renew the walls of Beytulmakdis after this dream<ref>Date of access: 4/5/2020 http://i2ud.org/j/html3/monuments/sites/t207_bab_asbat/index.html</ref>.

The gate is located in the eastern end of the northern part of al-Aqsa Mosque or Haram al-Sharif (Al- Ratrout, 2002, p. 307). Every gate in the al-Aqsa enclave have architecture feature and those gates are in harmony (Al- Ratrout, 2002, p. 312). Many of the doors have floral motifs and geometrical patterns, at the same time, gates had not been built with human and animal figures (Al- Ratrout, 2002, pp. 312–313). The entrance to the gate is impressively decorated. There has the single opening of a semicircular arch with a distinctive 45-degree chamfer and segmental inner arch at the part of the gate that has reached the present time, also the masonry of the wall shows that there are two gates because 1.20 meters of the gate wall reaches to the west side (Al-Ratrout, 2002, p. 307). According to al-Ratrout, the Early Muslim architecture of Bab al-Asbat and its dimension coincide with those of Bab al-Hashmi. The gate is 2.81-meters in width of the doorway, 3.30- meters in the width of the inner threshold of the doorway, and 4.30-meters in height of its arch (Al-Ratrout, 2002, p. 314).

Architecture in the Shape of “The Holy.” The University of Strathclyde, pp. 61–537.

Strange, G. le, 1890. Jerusalem, in Palestine Under the Moslem: A Description of Syria and Holy Land. COMMITTEE OF THE PALESTINE EXPLORATION FUND, p. 604.