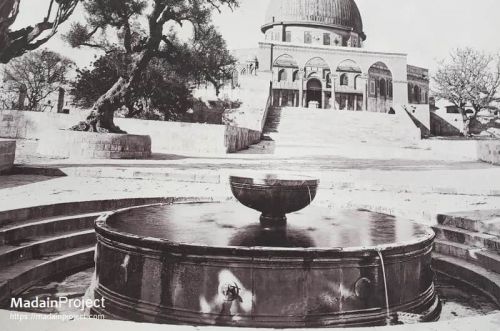 Kase Fountain is between Al-Jami al-Aqsa and Dome of the Rock in the Al-Aqsa Mosque. This fountain, which is slightly below ground level and descended by a few steps, took its final shape in the Ottoman period, during the time of Suleiman the Magnificent (Hadi, 2013). It consists of a round pool and a fountain in the middle. Stone seats were placed for the people who would make ablution around it. It means it is used by worshipers for ablutions before salah, a ritual washing of the hands, arms, legs, feet, and face before entry into the mosque. Around the pool, there are taps for ablution. The wall of the pool consists of marble, and it has a metal fence around it.

It was first built in 709 by the Umayyads, but according to the sources, after the conquest of Islamicjerusalem by Salahaddin Ayyubi, during Ayyubid period, Masjid al-Aqsa was rearranged according to the understanding and needs of Muslims (Ghosheh, 2005). There was also a need to build a fountain here. Thus, this fountain was built by Melik Adil in 1193 as ablution place. It has undergone a number of changes over the centuries. In the 20th century, this fountain was provided taps and stone seating (Ghosheh, 2005).

The Ayyubids mostly supported the Shafii madhhab as state policy. Actually, they had qadıs from all madhhabs, but the Chief of the qadıs belonged to the Shafii madhhab (Dündar, 2018). The Kase Fountain was originally made for Shafiis, who constitute the majority of Palestinian Muslims at that time. For this reason, its name is also known as Shafii Sabil. According to their madhhab, Shafis can take ablution from stationary water instead of running water (Güneş, 2015). For this reason, they do not need taps that provide running water. Shafis used to take ablution with the water accumulated in the pool of Kase Fountain, which was not surrounded by the metal fence (Ghosheh, 2005).

In 1327, Governor Tankiz who was the governor of Damascus during the Mamluk period, had his madrasah and baths built in the courtyard of Masjid al-Aqsa and restored and enlarged this fountain to accommodate more worshipers. In the same period, the fountain, which was damaged after the passing time, was restored for the second time by Sultan Kayitbay (Ghosheh, 2005).

In the 16th century, the city of Islamicjerusalem grew considerably during the Ottoman Period and water shortages began to occur. Suleiman the Magnificent solved the water problem in a short time with the water he brought from outside, dams and pools he built (Sevinç, 2016). One of the pools built by Suleiman the Magnificent during this period is Hala Sultan Pool, located just outside the walls of Islamicjerusalem. Its water flow into both the city and the Al-Aqsa Mosque. Another pool is the pool built in the city of Bethlehem. The water coming from this pool with the Arrub Canal feeds this fountain. In addition, Suleiman the Magnificent has restored the Kase Fountain during these works. So, it is also known as Fountain of Suleiman the Magnificent because it was restored by him. Here, we see that with the Ottoman entrance to city, the first things they did were fountain, pool, public fountain etc. They bring civilization to their destination instead of persecution. These people, who do not try to assimilate and exploit people, leave good things behind them (Köse, 2017). 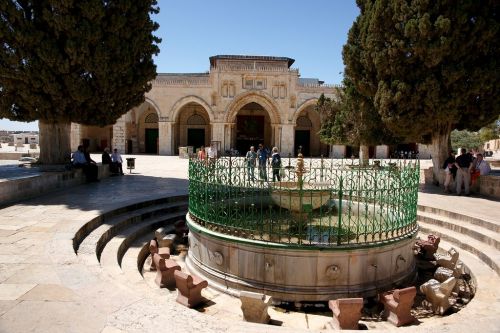